This Week.... I have been mostly ticking lifers!

This week has been a tiring yet interesting one for me and for once has pretty much gone my way when it comes to our feathered friends.
Over the past few weeks I had noted a Kentish Plover in Ireland that was a long stayer. I was cursing. They never stick like this in the UK. To my knowledge I have been for 12 of these and have dipped every time. It was beginning to become a joke, amongst my peers, especially as they had all ticked the Eyebrooke reservoir bird last year. So when news of a Lancs bird hit the news this week I was itching to get at it. It would have to be an early start the next day as my only choice and chance. 4a.m I was out the door and at 5.50a.m got to Cockersand Abbey. Got out the car into a glorious sunny morning and things felt right. I had said my little prayer to the birding gods and I was ready with the right attitude. Even the swallows seemed to sense how good a morning this was and obliged me with this picture as they sunned themselves. 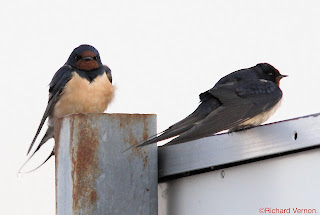 I started along the coastal path toward Plover Scar where the plover had been seen (pretty apt really) and nudged a Wheatear along the wall as I went. 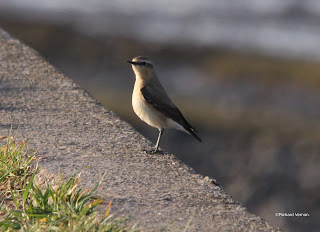 On scanning the sandbanks I picked up an unexpected year tick in the shape of Eider and there were a good number here certainly over 20. Also showing was a Black Swan which equally I wasn't expecting. I looked ahead and noticed a flock of waders milling about on the sandbanks up by the light station on the scar so headed forward with anticipation. As I arrived I could see the flock was made up of Dunlin and Ringed Plover, this is where it would be so I set up my scope. Typically as soon as I did this I the flock flew away from me and into the sun. Not good. However, patience is a virtue and soon enough they moved back to their original position and I started scanning. After 20 minutes of scanning I thought the worst until suddenly I picked out a smaller paler bird with its back to me. I waited and it turned around and sure enough it was the female Kentish Plover and a lifer for me. I can't explain how happy I was but safe to say I was jumping about with joy. I tried to take a shot with my camera but at distance it was a guess. But to my surprise when i zoomed in on the picture I had indeed got a  picture but obviously blurred. That was it I'd done it and went back to my car with a spring in my step and picked out 5 Whimbrel on the way. 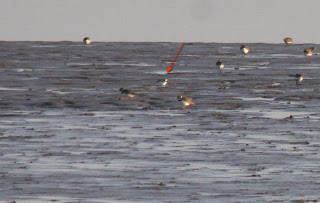 On phoning my mate Damon he said "well you could make it 2 lifers if you try". It turned out there was a Subalpine Warbler at Spurn. I knew I was stopping in Wakefield in a hotel that evening so decided that I might be able to make Spurn after work. So at 5pm I left Harrogate and headed to Spurn and got there at 7pm to a very blustery obs. I parked up and started looking around all the likely bushes at the warren. Nothing except a Whitethroat, a Blue tit and a Linnet. I didn't give up though and walked back onto the road and heard a call I wasn't certain of. I stood looking over some buckthorn and could still hear it but couldn't see anything. I then saw 2 locals appear out of nowhere and they were looking photo's. I went over and asked about the bird, "didn't you see it? We were watching you and assumed you'd seen it" It appears that whilst they were taking great pictures I was staring in the right area but all I could see was the sun shining in my face. They gave me some gen on the bird and it's favorite haunts and it turned out it had a liking to one particular bush. I waited by it and as the sun started to go red and lower something moved low down in it. There it was! It eventually came out onto exposed branches several times and allowed me to see its slate grey appearance and its eye ring. My first Subalpine Warbler (female) and I had ticked off 2 lifers in a day, both of these had been real bogey birds and I was amazed at my luck. I headed off for Wakefield into the Spurn sunset. 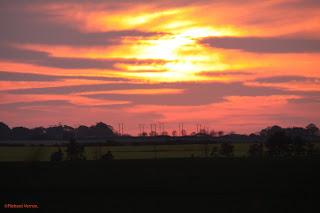 To top it all off I got to see a Barn Owl hunting along the roadside shortly after taking this and got to Wakefield at 11pm after feeding myself at the local golden arches.


The next day produced more, Wood Sandpiper at Eddersthorpe and Stone Curlew at Old Moor RSPB. I was put onto this by local birder Richard Collis and was pleased to also see here Ruff (see photo's below), Spotted Redshank, Med Gull, Common Tern and Hobby. The attractive young lady who gave me directions at Old moor turned out to be my good friend Mr Archer's girlfriend. It's a small world. 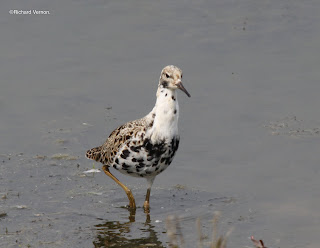 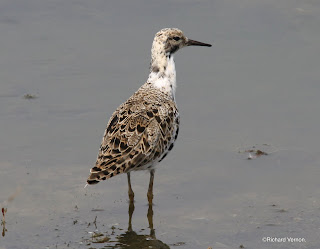 On my way home I dropped by Blithfield Reservoir and picked up Arctic (4) and Black terns (8). 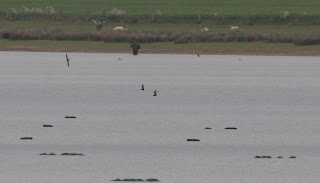 Once home I thought to myself what luck I'd had could it get any better. Well it did, 2 shots I'd been trying to get from my back door for weeks I managed to get. House Sparrow (they nest in my roof space) and Goldfinch. 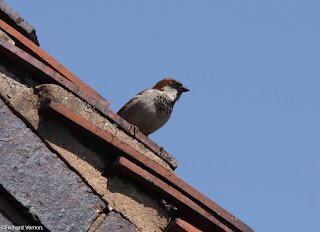 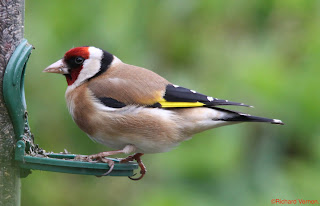 Sanderling at Neumann's flash. Did I need it for the year? Yes! so we nipped around and got Little Stint instead. What a week!
Posted by Big Vern at 09:28 No comments:

Last night I got a call from Rob Stokes to tell me there were 9 Dotteral on the Long Mynd at their usual place by the gliding station. This has recently become an annual event. Me and/or Rob check the gliding station and get nothing then, a few days later, someone else finds them and we have to dash like mad men to see these lovely birds.
So this news set me on edge a bit as I couldn't go immediately as it was dinner and bed times for my girls. A morning hunt would have to be arranged and so myself and Damon Howells drove up there this morning and luckily the birds were still present. 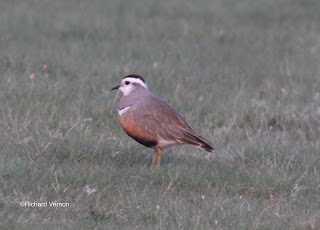 On a high we wondered what else we could get so we headed for Venus Pool and got 2 Swift flying over the car park. The pool was not really giving us anything new so we got up and headed for Wood Lane NR just in case that had produced a wader. It had, but only in the form of Common Sandpiper. So off to Colemere just in case a tern was about but alas nowt of interest except a nice party of Sand Martins flying low by us.
En route home we had 2 lots of Red Legged Partridge running in front of the car but other than that the Dotteral were the star birds.
Posted by Big Vern at 01:49 No comments:

So It's a sunny Sunday afternoon and I have been given a slot to go out for a couple of hours. With all the migrants coming through I thought why not sit it out at my nearest reserve Venus Pool. Maybe I'll pick something up?
On arrival I went to the main hide and saw a Lapwing close by and thought how stunning it looked in the light. Their feathers are amazing and produce many colours. 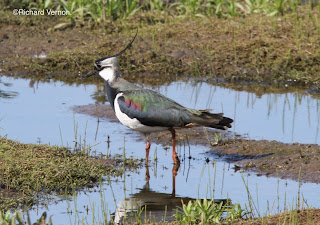 Then some action caught my eye, over by the new public hide, so I got my stuff, wandered round and sat myself down. The reason for my move was the chance to take photo's of Wagtails but my first shot ended up being a Lapwing in its infancy, one of 2 chicks (previously there had been 4) I wonder if any will survive? 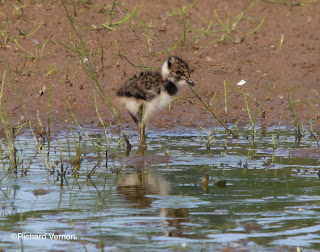 Eventually the Wagtail action began with a very smart, yet surprising, White Wagtail showing up first. 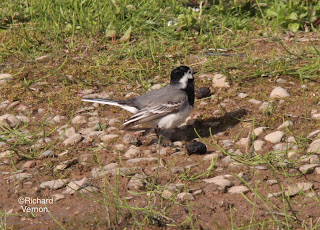 Much paler on the back than Pied Wagtail and with a defined contrast at the neckline between the grey and the black.
Then it was the turn of one of 6 Yellow Wagtails to give me a show. This particular bird was having a paddle. 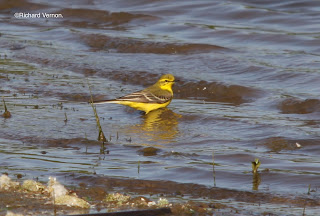 Then out of nowhere came the one I had waited for, Channel Wagtail! This bird has been hanging around Venus Pool for a while now but I hadn't seen it. With it's pale blue/grey head, with strong supercilium and extensive white on its throat, this bird was simply something new for me to gaze at in wonder. This was a first for me having previously only seen Blue headed Wagtail which it is derived from. 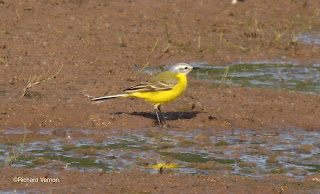 What an afternoon. Then to top it all off the Little Ringed Plovers came the closest they have ever come to the hide when I have been there and I got my best LRP shot to date. 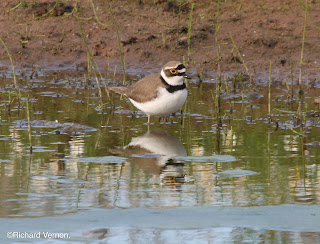 My afternoon was complete. All I needed to do now was go home for my Sunday Roast. Happy times.
Posted by Big Vern at 15:05 No comments: